(Express It without It)

Vasireddy Venkatadri Institute of Technology(VVIT), under VVIT Guntur ACM Student Chapter conducted the event “Ex-Press-It” on 31st January 2020 at 2:30PM in II IT B(508) New Block. EX-PRESS-IT is a two level event which tests the basic technical knowledge of the students and helps develop the zeal of learning by revealing some interesting facts to them regarding the concepts that they learn in every-day curriculum.

• The event is open for CSE & IT departments.

Students of 1st year and 2nd year from CSE & IT departments participated enthusiastically in the event accounting to 27 teams and 54 people in total.

ROUND 1: In the first round, few technical terms are shown to one of the team member. Set of words will be given to one among the teammates where he/she describes the word so that the other one will be able to guess the word. Each team was given 3 minutes of time and the event was simultaneously conducted for various teams with different set of words for each team under the supervision of the active members of ACM student chapter. The teams which guessed maximum number of words were qualified to the second round. A total of 9 teams were promoted to the next level.

ROUND 2: The final round is a rapid fire round where questions are shooted to the teams. This round helps in assisting the students how strong their foundation on basic programming based on their speed and accuracy of answering the questions. The team that gives maximum score within the given time is declared as winners.

The first prize winners are: 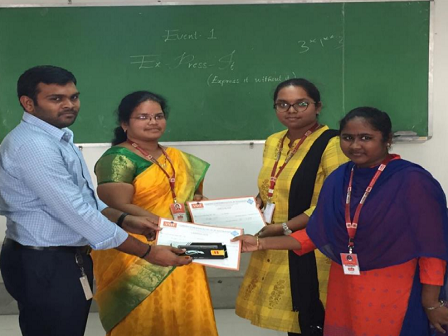 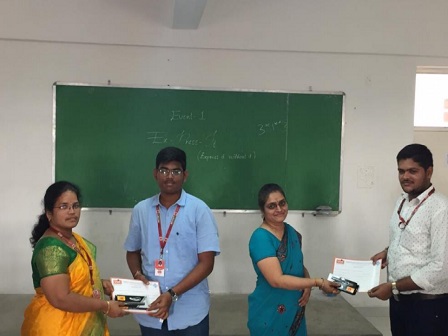